Anonymous is a hacktivist group known for its opposition to Scientology and the Church of the SubGenius, its support of WikiLeaks (along with Julian Assange and Bradley Manning), its many propaganda videos on YouTube, its ubiquitous Guy Fawkes masks, its support of and involvement in the "Occupy" movement, its many high-profile DDoS attacks using its "Low Orbit Ion Cannon" software to knock major websites offline, its millions of activists in countries all across the globe, its grey hat hacking against targets such as VISA, MasterCard, and Sony,

its copycat groups such as LulzSec and Goatse Security (itself part of the GNAA), its constant use of Internet memes popular on websites like 4chan, and its close ties to The Church of the SubGenius, with many SubGenii actively participating in Anonymous and many Anons are suspected of having infiltrated the Church of the SubGenius as ordained ministers.

Here is a video of SubGenius Rev. Twobeans speaking to a large crowd at an Anonymous rally against Scientology: 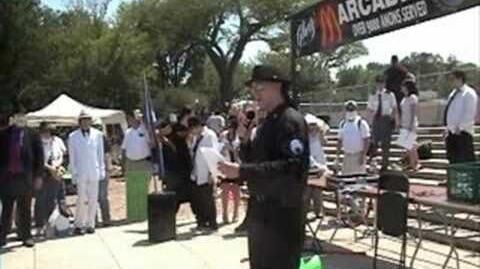 Retrieved from "https://subgenius.fandom.com/wiki/Anonymous?oldid=15332"
Community content is available under CC-BY-SA unless otherwise noted.