Well, boys and girls, you've been so good today, that now, as a little treat, I'll read to you a fairy tale, about The Illuminati:

Nevertheless, The Illuminati are one of the most influential parts of The Conspiracy, and through their New World Order project that they have been gradually putting together for many centuries, they now directly or indirectly control all major world governments, corporations, and other large organizations on the planet Earth, including the Church of the SubGenius (which they control through psyops, financial shenanigans, false flag operations, double agents, overt propaganda, subliminal messages, and through their control of the media and the legal system and the fact that they rig every election carried out anywhere on the planet, even elections in junior high student council, since members of The Illuminati are members starting at birth).

Historically, The Illuminati originated in places such as ancient Greece and ancient Rome, where they were the followers of the goddess of chaos, Eris Discordia, called Eris by the Greeks and Discordia by the Romans. There were followers of Eris Discordia in many other polytheistic civilizations of the ancient world, in ancient Egypt, in the Aztec and Mayan civilizations, in the ancient Hindus, in ancient Babylon, and the ancient Chinese, and the followers of Norse and Druidic teachings of the ancient world, and she was known by a different name and had different stories told about her in each of these ancient civilizations that worshiped her as a goddess. They held the same exact beliefs as modern-day Discordians do. One by one, in each of these areas all over the world, the followers of Eris Discordia began to be persecuted for their beliefs, rituals, and traditions, by followers of other gods. Most notably, Christianity became the official religion of the Roman Empire under Emperor Constantine, and the Roman Empire included both Greece and Rome at that time as well as many other areas where the goddess of chaos was worshiped. Followers of the older polytheistic religions began to be persecuted, and followers of Eris Discordia were singled out because of their belief in spreading chaos and disorder, and their anti-authoritarian ways. In order to survive, these ancient followers of Eris Discordia, these PreDiscordians, became a secret society known as The Illuminati, publicly pretending to support their oppressive rulers who had persecuted them for beliefs, all the while scheming behind closed doors their plans for revenge and overthrowing the rule of all who opposed them.

Over many centuries, The Illuminati grew in numbers and influence all over the world, and gradually their original anti-authoritarian views morphed into opposing the authority of anyone besides them, and wanting to get their own members in control of everything to achieve world domination. They succeeded beyond their wildest dreams, in achieving control over all of the various governments, would play governments off against each other, fighting wars, for their own amusement. They were supernaturally aided in all of these efforts by Elder Gods such as Eris Discordia, as well as the Men in Black, supernatural agents of the Elder Gods, and the rebel god NHGH, who was plotting against the Elder Gods the whole time, and planned to use The Illuminati against them. This made The Illuminati almost unstoppable, as they set out to build the modern world in their image, engineering conflicts between the nation-states they built up and between the political parties they founded, all in order to divide and conquer the rest of the humans. Unfortunately for them, J. R. "Bob" Dobbs came along, and in 1953, with the Divine Emaculation of "Bob" by the Elder God Jehovah 1, the real fight against The Illuminati and the rest of The Conspiracy began, as Jehovah 1 and the other Elder Gods realized that The Illuminati had become a tool of the rebel god NHGH, and so Jehovah 1 and the other Elder Gods began their counterattack against The Illuminati and The Conspiracy. J. R. "Bob" Dobbs infiltrated the highest echelons of The Illuminati and The Conspiracy, learning all of their secrets, and founded the Church of the SubGenius to take the fight to The Conspiracy and defeat them once and for all.

Next came Eris Discordia, who realized that her goal of spreading chaos and disorder was no longer being fulfilled by The Illuminati, and that, despite their worship of her, they no longer followed any of her teachings correctly. Eris Discordia arranged for a mysterious book of forbidden knowledge, the Principia Discordia, to come into existence, a book that was written in the future and then sent back in time to the year 1955, when 2 rebellious young men who went by the names Malcalypse the Younger and Omar Khayyam Ravenhurst fatefully came across the copy of Principia Discordia that had been sent back in time, and went about trying to get it published, eventually succeeding around 1957 or 1958. These 2 men went on to found the Discordian religion based on the TRUE teachings of Eris Discordia and not the heretical beliefs that The Illuminati had come to follow. The Discordians became even more popular after The Illuminatus! Trilogy by Robert Anton Wilson exposed The Illuminati while promoting Discordianism, and soon The Illuminati had more people fighting them.

The Elder God Cthulhu had been up to other things, getting the Mad Arab Abdul Alhazred to write the Necronomicon several centuries earlier, and then getting H. P. Lovecraft to write the books of the Cthulhu Mythos, all to bring about his own revival. When Cthulhu learned of the betrayal of The Illuminati, he likewise began to work against them, turning his followers against them, getting more people to become followers of the Cult of Cthulhu, and eventually, creating an alternate identity, the Flying Spaghetti Monster, to attract millions of people to a new religion of Pastafarianism, which is actually devoted to Cthulhu, so that one day he could rise up from the sunken city of R'lyeh and crush The Illuminati and their New World Order.

However, due to bickering amongst the Elder Gods and among their followers, they have been unable to fight as a unified front against The Illuminati and the rest of The Conspiracy, and The Illuminati have continued expanding their control over all of Earth. This is why the Elder God Jehovah 1 decided to have his X-ist alien allies destroy Earth on X-Day, July 5, 1998, and have his loyal followers, the SubGenii, Ruptured onto the Pleasure Saucers and taken safely to Planet X, while all of the humans on Earth would be destroyed.

Unfortunately, July 5, 1998 came and went, without the prophecies being fulfilled. NHGH and The Conspiracy had sabotaged things. But documentary films from the future have come back in time due to Time Control, so we do know what the future holds. X-Day WILL happen. It seems The Illuminati had altered the calenders, many centuries ago, resulting in the actual year and date being different from the ones The Conspiracy wants you to believe it is. Yet their defeat on X-Day is inevitable, when the REAL July 5, 1998 finally DOES roll around. And NHGH, a product of the Negative Timestream who lives time backwards, is nearing the point in time when he is born, and after that, he will no longer exist. Soon The Illuminati and all the rest of the humans will be sitting ducks for the Men from Planet X to destroy.

Yet that is not the whole story. For some humans will survive the carnage of X-Day, and try to rebuild Earth, led by members of The Illuminati. At this point, Earth will be a hellish place, known as Hell on Earth, and The Illuminati will all undergo surgery to transform themselves into the Bozos, a race of clowns who will rule the entire world, enslaving the rest of humanity as Wage Slaves who work 23 hours a day, and they will launch an invasion of Mars. But this will be a Pyrrhic victory, for by this point in time, the surface of Earth will be uninhabitable, with the survivors all living underground, and the way of life will be hellish even for The Illuminati, who will all be Bozos by that point. While The Illuminati will finally achieve complete world domination under a New World Order, it will be domination of a shattered, defeated world, which they will only achieve in the humiliating guise of Bozos, humans surgically altered to become clowns. This is all documented in the film Let's Visit the World of the Future.

However, the final chapter of the story is happier. The followers of Cthulhu (remember them?) will finally succeed in their goal of reviving Cthulhu from the sunken city of R'lyeh in the South Pacific, and Cthulhu will systematically eradicate all of the Bozos, as well as anyone else who opposes his evil rule, killing off everyone except loyal followers of the Cult of Cthulhu, who were masquerading as harmless Pastafarians to avoid the suspicion of the Bozos. Cthulhu will have final reign over the Earth from then until the end of time. The Discordians, for their rebellious ways against the tyranny of the Bozos, will all off be fighting the war on Mars at this time, since the Bozos didn't want them causing trouble back on Earth so they were banished to fight on the front lines of the war. The Discordians will decisively win the war on Mars, killing off most of the native Martians except for a small minority which will have to live on reservations, and Mars will become a Discordian paradise. The SubGenii will all be safely on Planet X, after incredibly enjoyable trips on the Pleasure Saucers with the Alien Sex Goddesses. And The Illuminati, along with the rest of The Conspiracy, will be completely destroyed, wiped out of existence entirely, never to return again. And on Planet X, "Bob" will take a puff on his pipe full of frop, and grin even more broadly than usual, absolutely clueless about anything that happened or his vital role in it, just basking in pure Slack and the infinite bliss of his infinite ignorance, as several violent feminist UberFemme followers of Connie, with the help of a few Alien Sex Goddesses, begin tearing him apart limb by limb and forcing him to eat the flesh of his dismembered limbs, as "Bob" masochistically enjoys the pain, while finding his own flesh delicious, and finding the whole thing of having women tear him apart limb by limb an incredible turn-on. The perv.

And everyone will live happily ever after, except The Illuminati and The Conspiracy and billions of innocent humans, who all died, oh yeah, and I guess "Bob" died too, but who cares? Nobody, because it will turn out that the blood of "Bob", which the UberFemmes and Alien Sex Goddesses will all drink after killing him, is the most powerful aphrodisiac in the universe, and its effects are permanent, much to the joy of the OverMen, and there will be much mating, and it will be good. THE END.

Now here's a documentary that tells PART of the story of The Illuminati... a VERY SMALL part of it, but they DO have all their facts right: 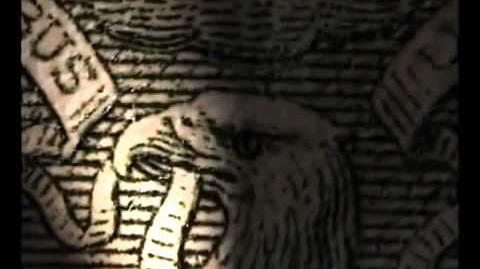