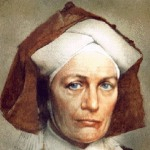 If you manipulate and lie to everyone around you to enrich yourself with Slack, and generally make a loud spectacle of yourself in doing so, then you fit the Pope profile. --Rev. Ivan Stang

I'm Pope Hilde. As of 28 Juy 2015 I'm the adopter of this site, and am also an admin of Discordia Wiki. For anyone who cares, I am an ordained minister of the Church of the SubGenius (see below). I've written for various wikis, and co-wrote an independent SubGenius piece published in a magazine and am helping with a book.

I'm a mother with a son Carl who was adopted when I was a teenager and daughter Erisa who lives with me and loves school. My sother is Fundament who's in the Marines. We had another child, Phillip, born three days later than expected on Dec. 26, 2015. In spite of being born late he was in an incubator, but is now doing very well.

I have a degree in journalism and write for a small newspaper. I edit wikis because it lets me write things I could never write for the paper. I hope you enjoy what I write here!

Many years ago, I was given a Church of the SubGenius membership by my sother. I didn't know what the church was, so read about it. It looked to me like an excuse for my man to quit his job, commit acts of violence, and have sex with anyone and anything without caring about how any of this would affect me. Maybe you can understand why this did not fill me with great enthusiasm for the church. I don't remember if I tossed the membership packet or burned it. Maybe I made him eat it.

Years later, I got reintroduced to the church through Discordianism. This time, looking through eyes guided by Eris, I got it. I think.

As I understand it, I am still a SubGenius minister on the basis of that first paid membership. But I had no proof. Someone kindly gave me a gift membership so I would have proof. But as the giver didn't have their own membership and I technically did, I returned it. That led to many complications which are discussed in various posts in this website including Forum:Pope Hilde & Miley Spears: Sockpuppets?.

Finally, in early 2017, I got a third membership packet. I filled that out and returned the enclosed card, so I am now on the Church record books under the name Pope Hilde. I suppose this means that when the X-ists come, I'll have two seats on the Pleasure Saucer. Or three.

Retrieved from "https://subgenius.fandom.com/wiki/User:Pope_Hilde?oldid=14886"
Community content is available under CC-BY-SA unless otherwise noted.